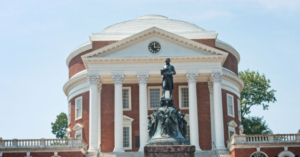 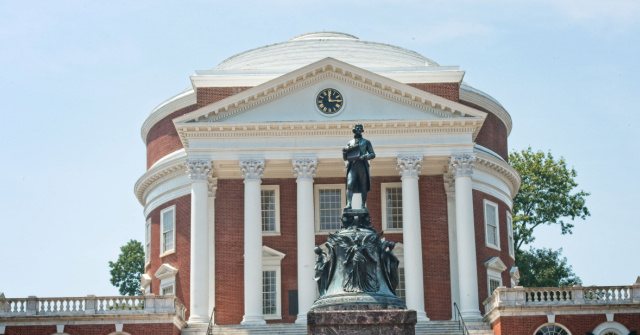 The editorial board of the University of Virginia’s newspaper has called to remove references to University founder and Founding Father Thomas Jefferson.

The University and the greater Charlottesville, Virginia, area in which it is located has taken it upon themselves to be defined not by academics, or history, or any other trait. Rather, those in charge of local government and University administration prefer to be defined by a single characteristic: the August 12, 2017, “Unite the Right” rally.

One week ago was the five-year anniversary of the rally, and Charlottesville residents and University students and alumni were reliably accosted by “never forget”-style messages, being told that everyone needed to “do more” to atone for what happened there.

The day “brings difficult memories and a sobering reminder that our country is not yet free from bigotry, racism, and intolerance,” University President Jim Ryan wrote in an open letter to the University community on August 11. “We cannot, and should not, forget those dark days five years ago.”

The editorial board of the Cavalier Daily, the student-run newspaper that has existed since 1890, typically uses the yearly passing of August 12 to call for something radical — and this year was no different.

While on the one hand they call for educating students on the histories of Charlottesville and the University, they also call for “creat[ing] a physical environment that reflects our commitment to equality and disavowal of white supremacy.”

“We reject how the University’s physical environment — one that glorifies racists, slaveholders and eugenicists with statues and buildings named in their honor — upholds an enduring culture of white supremacy,” they editorial board writes.

The issue for them is, predictably, anything and everything under the sun about the University is what is wrong with the University.

Referencing a Ku Klux Klan rally that “hosted its inauguration ceremony at Jefferson’s Monticello tomb” and the gathering of white supremacists with tiki torches on August 11, 2017, around Jefferson’s statue on The Lawn — part of the original Academical Village built by Jefferson — the editorial board argues that the prevalence of Jefferson himself at his own University is enough to motivate the kinds of actions that took place in 2017.

“There is a reason why they felt comfortable marching through Grounds. Our physical environment — from statues to building names to Jefferson’s overwhelming presence — exalts people who held the same beliefs as the repugnant white supremacists in attendance at the ‘Unite the Right’ rally,” they write. “These buildings must be renamed and memorials removed.”

“The Cavalier Daily has chosen the dark road,” Young Americans for Freedom-UVA chairman Nickolaus Cabrera told Breitbart News. “Every year, the radicals display the August 11th and 12th events of 2017 as a means of cultural setback. They use the ‘Unite the Right’ rally for their own political ends. Cavalier Daily continues to use these horrific events to progress their own anti-Jefferson narrative. As they continue to push their anti-Jefferson narrative under the guise of social justice, they continue to harm the strong, foundational principles that Jefferson sought when founding the University of Virginia.”

“Time and time again, the Cavalier Daily progresses its radical liberal, left-wing agenda onto the students of the University of Virginia and the Greater Charlottesville Community,” he continued. “In a recent editorial entitled “To create ‘citizen leaders,’ U.Va. must do more,” the Editorial Board of the Cavalier Daily described Jefferson’s presence at UVa as ‘overwhelming.’ The Editorial Board proceeds with the claim that this belief ‘exalts people who held the same beliefs as the repugnant white supremacists in attendance at the ‘Unite the Right’ rally.’”

Cabrera also noted that the Cavalier Daily article hyperlinked to another piece arguing that the statue of Jefferson in front of the Rotunda be “recontextualized” as an “emblem of white supremacy.”

“Leftists at UVA are intent on erasing history they find uncomfortable,” Young America’s Foundation spokeswoman Kara Zupkus told Breitbart News. “Why attend Thomas Jefferson’s University if you despise the Founding Fathers? It’s up to conservatives on campus to push back against this cancel culture, and ensure America’s true founding principles live on at the University of Virginia.”