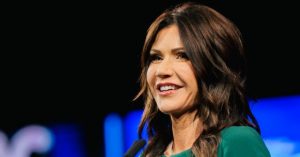 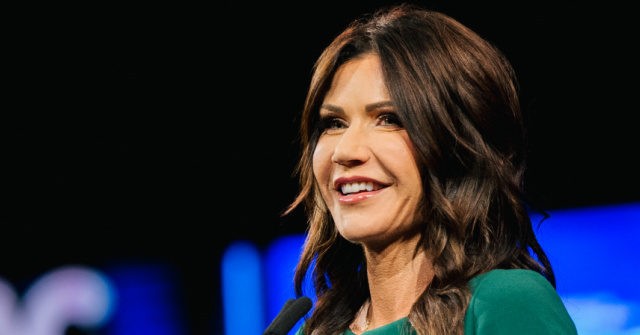 “I think it’s fantastic. I love to see these moms going forward and these dads going forward giving passionate speeches about what their kids are being exposed to and what they’re teaching in these classrooms,” Noem said in an interview when asked about parents rising up nationwide against the controversial ideology. “We need to remember that by the time a child gets into the K-12 public school system that teacher is spending more time with them than the parents are, and who they are around and who they’re surrounding themselves with has an impact on what they believe. I’ve always said school board is one of the toughest jobs out there because you’re so close to the people and people are passionate about their children, but that’s where we make sure that the foundation of this country is protected, with our kids. We have to make sure they know the true, honest history of America and our founders so that they can make the best decisions and know that the country they live in is still the most remarkable country in the world.”

Asked in a follow-up question about critical race theory infecting even the highest levels of the U.S. military, with Chairman of the Joint Chiefs of Staff Gen. Mark Milley promoting critical race theory at a recent congressional hearing, Noem said the harmful ideology is “all about power.”

“It’s all about power. It’s all about power. That is—let’s be clear,” Noem said. “They want more control over your life. It gives them more opportunities to be successful and gain power in order to have more jurisdiction. That’s not what America was about. Our founders escaped from a country with a king because they wanted to be free ,and remember our very first president walked away from the presidency—from the opportunity to be a king—because he recognized how special he wanted America to be. So, we have a huge history that teaches us life lessons that we need to be focused on, and honestly we should be talking about those rather than focusing on the negativity of the Marxist theories that are coming out of so many of these leaders today.”

Noem’s comments came in an exclusive interview here at the Family Leadership Summit in downtown Des Moines, Iowa–an annual gathering of Christian conservatives–just before she spoke to the crowd of about a thousand present on Friday afternoon last week. The interview aired on Breitbart News Saturday on SiriusXM 125 the Patriot Channel this weekend.

Noem was one of three potential 2024 GOP presidential candidates to speak at the summit, along with former U.S. Vice President Mike Pence and former U.S. Secretary of State Mike Pompeo—both of whom also sat for exclusive interviews with Breitbart News backstage at the event.

Asked if she’s considering a White House bid, though, Noem said she is not thinking about it at this time—and is instead focused on her own reelection bid in neighboring South Dakota.

“No I’m not—I’m running for reelection for governor of South Dakota,” she said. “It’s good to be here with everybody though. It’s just wonderful folks who care about the conservative movement in the country and their faith and it’s going to be a great opportunity for us to chat and visit.”

Noem had fierce criticism for Washington, D.C., which is controlled by Democrats who have the White House and majorities in both chambers of the U.S. Congress.

“I don’t even recognize the America that we have today,” she said when asked to give her thoughts on the Biden administration so far. “It doesn’t look at all like the one I grew up in. I think it is a concerning time and what happened in the last 18 months in this country I think is unprecedented. We watched government step up and take over and take control over people’s lives and people gave up their freedoms, so this is really going to be a time for tough leaders, leaders that know their constitutional jobs and authorities and stand by them and make tough decisions that are good for our country.”

A key part of Noem’s national message is that she never locked down South Dakota during even the early days of the coronavirus pandemic, something she proudly professes everywhere she goes now.

“I think we had all the same information that every other governor did,” Noem said about the decision to always keep her state open. “I just spent a lot of time with my legal counsel and with constitutional attorneys just asking them questions about my authority and what my job was as governor and what authorities I did not have and then making my decisions off of it. Ultimately, I just trusted people and told them I’d give them all the information I had, but I was going to let them use personal responsibility, and that really is what I’ve done my entire public service life. When I was in Congress, as I ran for governor, I talked about building strong families and keeping a low regulatory environment and low tax environment and making sure we were going after opportunities to tell our stories. I had no idea that would happen in a pandemic, but I think people know where South Dakota is now and I think people recognize the quality of life there is so much better than Democrat-run cities and states. We have people moving to South Dakota by the thousands because they want to be like us. They want to come where a government respects them, and I think that’s a wonderful thing to be known for.”

In her recent speech to the Conservative Political Action Conference (CPAC) in Dallas, Texas, Noem even took a shot at some of her fellow GOP governors who locked their states down at the beginning of the pandemic. Even states like Florida, Georgia, and Texas, red states with GOP governors who got tons of attention for opening up early in the pandemic, locked down. South Dakota never did. Asked during her interview with Breitbart News is she was referring to any governor in particular in that CPAC speech, she said she was not talking about anyone specifically but did compare efforts to rewrite lockdown history to efforts to rewrite U.S. history being seen in the critical race theory fight.

Noem also said she intends to help Republicans in the midterm elections coming up, whenever she can. The last time Noem did an exclusive interview with Breitbart News was down in south Georgia in the lead-up to the U.S. Senate runoffs there, and while the GOP senators lost and Democrats took control of the U.S. Senate, she wants to make sure, as always, she leaves it all on the field in every campaign.

“I certainly will if it’s helpful,” Noem said. “I campaigned hard for President Trump, I campaigned hard for those senators because I didn’t want to wake up the day after the election and wish that I had done more. I think that’s the question every single American needs to ask themselves. I don’t think one person can save this country. We all have our part in this. So I would encourage everybody that if they’re concerned about what they’re seeing on the news, if they’re concerned about these teachings, they need to get up in the morning too and ask, ‘What more can I do to be a part of the solution?’”

Asked for advice to Republican voters around the country and to GOP lawmakers on how to win moving forward, Noem encouraged people to be “optimistic” and “happy”—because that positive energy attracts supporters.

“I would encourage them to be optimistic,” Noem said. “People want to be around other people who are happy. We truly have the beliefs and the values that create opportunity and success. We should be talking about that. We should then follow through on what we say we believe. That’s all South Dakota did since I’ve been governor is just put into place what conservatives always said they believe in. It’s working. Just look at how we’re thriving. We have historic revenues. Our businesses stayed open and are successful. Thousands of people are moving to our state. We’re bringing in new industries. We’re excited about the future and South Dakota is thriving and the people are too and it’s because we followed through on conservative principles and policies and it’s working.”

Noem also said thousands of people are moving to South Dakota from places like California, New York, and other failing Democrat-run states and cities around the country in an effort to seek out freedom. She is not concerned, though, that they might be bringing leftist politics with them to South Dakota because, she said, the people moving there are disaffected conservatives from blue cities and states seeking out better opportunities in her ruby red state.

“They don’t come to South Dakota for our weather,” Noem said. “They don’t come for any beaches or anything—Mount Rushmore is beautiful, but people are coming because they want a government that respects them. Overwhelmingly, they are conservative people that are living in Democrat-run cities and states and they’ve said, ‘I’ve had enough.’ Or they’re people who have a tie to South Dakota and always said, ‘I’ll come back some day,’ and with everything that is going on now they’re coming back today. We have so many stories of people coming from across the country because they want their kids in classrooms and they recognize how bad it was hurting their education. I don’t believe we’re recruiting any kind of liberals—if they like their policies they can live with their policies. The people coming to South Dakota want to have a limited government and make decisions for their own families.” 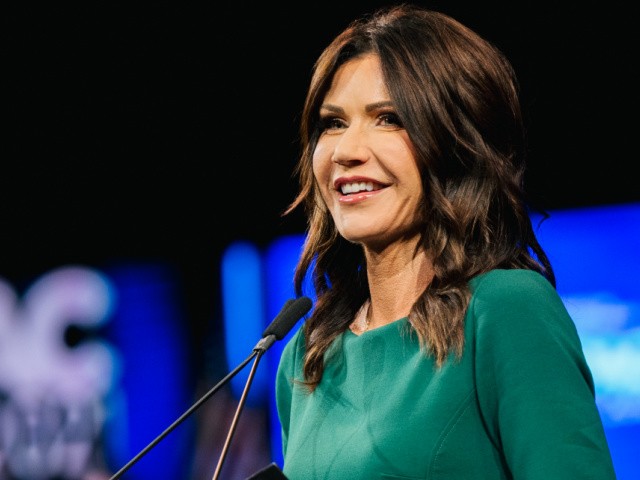