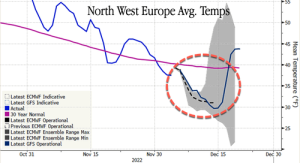 After an above-average autumn in Europe, winter weather has finally arrived.

Ahead of the cold blast, we said on November 22 that “Europe’s First Major Cold Snap Of The Season Is Imminent.” Then last week, we pointed out,” ‘Greenland Block’ Could Pour Arctic Air Across EU In First Proper Test Of Power Grids.”

The unseasonably cold weather has spread across northwest Europe and the UK and is forecasted to stay in place through the month’s midpoint. 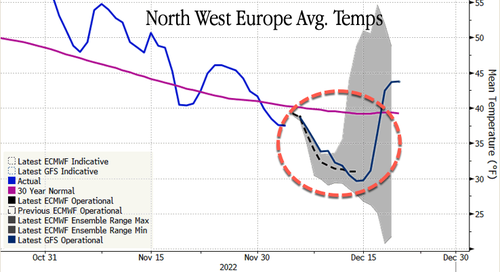 Dutch TTF natural gas futures, the benchmark European contract, jumped as much as 9.2% on Monday morning on this news. 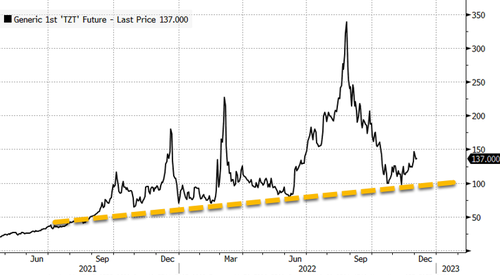 “That’s testing the continent’s ability to withstand this winter without normal flows from its former top gas provider, Russia. Only Iberia and the south of Europe are spared from the frigid weather for now,” Bloomberg said, citing a report from forecaster Maxar Technologies Inc.

Europe’s warm autumn allowed the continent’s NatGas storage facilities to fill to 95% by mid-November. In recent weeks, injections into storage have switched to the draws as the heating season begins. 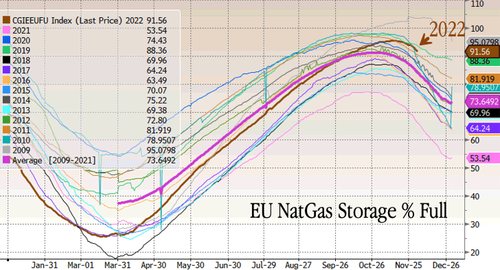 Meanwhile, the number of liquefied natural gas (LNG) tankers idling off Europe, waiting for regasification terminals, has significantly decreased by 30% from this year’s high, according to data from S&P Global Commodity Insights. That’s causing concern that supplies could become an issue if winter is severe.