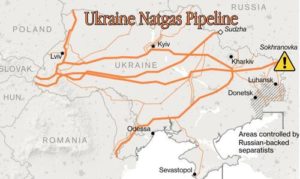 Benchmark European natural gas futures jumped as much as 8% Tuesday after it was reported natgas flows into Ukraine at one key entry point from Russia would be halted. There are only two entry points, which means all natgas would be diverted to the second entry point.

Ukraine’s Gas Transmission System Operator said it would no longer accept Russian gas transit via Sokhranivka beginning at 0700 local time on Wednesday. Mainly because it “repeatedly informed Gazprom about threats of transit due to the actions of the Russian-controlled occupation forces and demanded an end to interference in the operation of the facilities, but these appeals were ignored.”

❗️#Ukraine stops gas transit through the “Sohranivka” gas pipeline system due to loss of control over the #Novopskov compressor station in #Luhansk Region.

Almost a third of the transit to #Europe passed through this station. pic.twitter.com/LlpsJUwTCM

Ukraine has a sprawling network of natgas transmission pipelines from Russia that feed into Europe. As of Tuesday, Bloomberg data showed that 27% of natgas was routed through Sokhranivka, and the rest went through Sudzha. This means that all natgas into Ukraine (from Russia) will transit Sudzha after 0701 local time tomorrow morning. 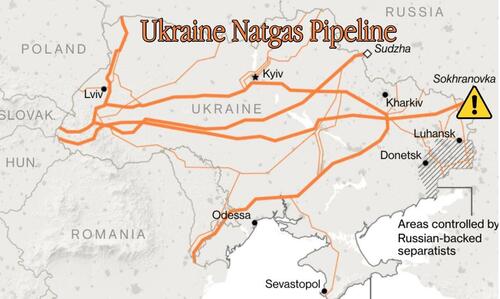 Russian energy company Gazprom said it received notification from Ukraine that all gas transiting via Sokhranivka will be halted. It said the transition would be seamless and won’t affect flow.

On the news, European natgas prices traded as high as 98.48 euros per megawatt-hour. 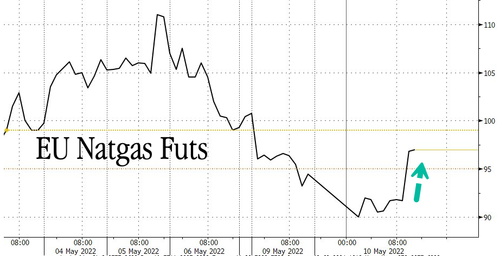 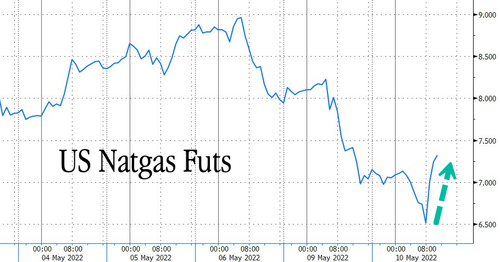 This news follows much debate among the European Union’s 27 countries to enforce a complete ban on Russian crude and refined fuels imports. There have been fears that declining natgas flows into Europe could exacerbate an energy crisis that may spark a recession in Germany. 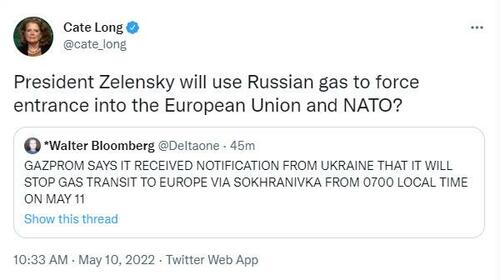 As suggested above, will Ukrainian President Volodymyr Zelenskyy force Ukraine into the EU and NATO via Russian natgas?