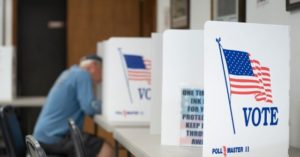 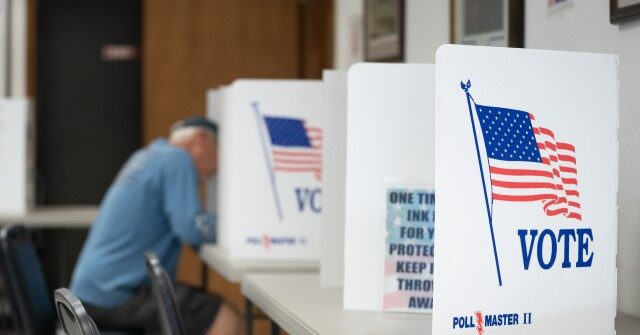 Voters in Missouri, Arizona, Michigan, Washington State, Kansas, and Ohio head to the polls on Tuesday to again test the resolve of former President Donald Trump’s Make America Great Again (MAGA) movement, with several key races from coast to coast setting the tone for the future of the Republican Party.

In Missouri, former Gov. Eric Greitens faces off against Attorney General Eric Schmitt in the GOP senatorial primary also featuring Reps. Billy Long (R-MO) and Vicky Hartzler (R-MO). Greitens, who has portrayed himself as the real MAGA candidate, was the first candidate nationwide to pledge to oppose Senate GOP Leader Mitch McConnell no matter what if elected. His anti-establishment aggression has drawn fierce opposition from the likes of McConnell and other establishment foes like former George W. Bush aide Karl Rove, but Schmitt has tried to position himself similarly–despite backing from major mega-donors connected to McConnell–as a Trump-aligned conservative. The fight for Trump’s support culminated on Monday with an endorsement by Trump for simply “ERIC”–with the former president not specifying one or the other–and both of them claiming his endorsement meant them. Whichever one wins will say a lot about the future of the party, and could set the tone for the beginning of the end of McConnell either way as even Schmitt came out against McConnell at the very end of the race following Greitens’ lead.

Out in Arizona, Trump-backed gubernatorial candidate Kari Lake has shocked the GOP establishment with a brash campaign while the establishment has rushed in to push Karrin Taylor Robson. The race has pitted Trump against his former wingman former Vice President Mike Pence, who campaigned for Robson on the same day Trump held a rally with Lake. Lake seems to have broken out in the polls in the home stretch, suggesting Trump’s backing and her aggressive anti-establishment style might win the day–and a loss for Robson would be a serious setback for the establishment wing of the GOP. In the Senate primary, likewise, a similar type of fight is playing out with Trump-backed Blake Masters taking a huge lead over his primary opponents as Republicans look to November to try to oust Sen. Mark Kelly (D-AZ) in this critical race.

Michiganders, meanwhile, will select who will face off against Democrat Gov. Gretchen Whitmer, with Tudor Dixon the favorite to close the deal in the primary on Tuesday night after she surged in polls thanks to a late endorsement from Trump in the final days of the campaign. Dixon will have to work to unite the party after a bruising primary and challenge the increasingly competitive Whitmer in November, and has a tough road ahead of her, but many allies of Dixon’s think she can pull it off. Michigan voters will also judge the fate of Rep. Peter Meijer (R-MI), one of the 10 House Republicans who voted to impeach Trump in early 2021.

Up in Washington State, two impeachment Republicans–Reps. Dan Newhouse (R-WA) and Jaime Herrera Beutler (R-WA)–also face judgement day. If any of these three go down on Tuesday night, that bodes even more badly for Rep. Liz Cheney (R-WY), whose Wyoming primary looms just a couple weeks from now on August 16.

Ohio voters meanwhile have statehouse elections, and there may be some interesting developments there. Kansas, too, is going to select a GOP nominee for governor to take on Gov. Laura Kelly (D-KS)–a Democrat and top target of Republicans this year.

Follow along here for live updates as the results pour in from across the country.

Kari Lake keeps inching closer. The margin is now down to 8.4 percent with still 58 percent reporting.

In the Senate GOP primary in Arizona, however, Trump’s pick Blake Masters is still up a solid 4 percent. That seems likely to hold on as more Election Day votes come in.

As more votes keep coming in, Kari Lake keeps improving her position in Arizona’s GOP gubernatorial primary. With 58 percent in now, she has climbed back to trailing Karrin Taylor Robson by just 8.6 percent. The question is whether enough Election Day votes are still outstanding to get her what she needs.

Rep. Peter Meijer (R-MI), another Republican who backed impeachment of then-President Donald Trump in early 2021, has lost his primary to Trump-backed John Gibbs:

Rating change: @CookPolitical will be moving #MI03 from Toss Up to Lean D.

Paul Junge has won the GOP nomination for Congress in Michigan’s eighth congressional district and will face Rep. Dan Kildee (D-MI) in November. This is a key battleground race and is rated as a toss up by the Cook Political Report.

Trump-backed Mark Finchem has won the GOP nomination for Secretary of State in Arizona, another big win for the former president:

In Kansas, Kris Kobach has won the attorney general primary as he mounts a political comeback in the heartland state:

His political comeback is on

In Michigan’s third, it looks pro-impeachment Rep. Peter Meijer (R-MI) is in serious jeopardy of losing his race to Trump-backed John Gibbs:

Up in Michigan’s third district, Gibbs is back out in front by a few hundred votes over Meijer. The New York Times says 35 percent is reporting there, which would suggest there is a long way to go still–but it is possible that more has reported than that as sometimes news outlets get the percentages reporting off.

It is worth noting that as of now Trump’s endorsement is perfect tonight across the country. There are some tight races out there though so it is as of yet unclear whether that will stay the case, but he is having a strong night no doubt and was up against some serious donor class opposition in lots of places.

It looks like Trump-backed Eli Crane has won the GOP nomination for Congress in Arizona’s second congressional district:

Based on initial returns, it’s also a strong bet pro-impeachment Rep. Jaime Herrera Beutler (R) will advance in #WA03‘s top-two primary. As long as she does, she’s safe in November (against either a D or R).

Both Newhouse and Herrera Beutler aided by split pro-Trump opposition.

In the Arizona Attorney General race, Trump-backed Abe Hamadeh has a nearly 5 percent lead with 48 percent reporting. He is looking strong after the early vote reports.

With 51 percent reporting in Arizona’s GOP gubernatorial primary, Karrin Taylor Robson has 49.5 percent of the vote and Kari Lake has 40.8 percent. Lake is catching up as more votes are coming in.

The first votes are in now in Arizona and Trump-backed Blake Masters is leading in the Senate primary by more than five points. Kari Lake, the Trump-backed candidate for governor, is down 10 to start–but these are early voting numbers so expect that to change significantly.

The polls have closed in Washington State. Results are expected there and in Arizona soon.

In Michigan’s third district, Meijer has taken a slight over Gibbs. This race is super close.

It appears voters in Kansas have defeated a ballot measure would have allowed for further abortion restrictions:

Eric Schmitt has won in Missouri, per the AP:

This means Trump wins again, as he endorsed a generic “Eric” the night before the election.

The polls have closed in Arizona and results are expected imminently.

With 15 percent in now in Michigan’s third, it has tightened significantly. Gibbs is down to just 50.8 percent and Meijer is up to 49.2 percent.

The AP formally calls it for Tudor Dixon, Trump’s selection, in Michigan:

Derek Schmidt, a Trump pick, has won the GOP nomination for governor in Kansas:

Wasserman from Cook Political Report is saying that he expects Schmitt will win in Missouri:

According to the New York Times, only 4 percent are reporting but Schmitt is at 45.9 percent and Hartzler is at 22.2 percent while Greitens is at 17.9 percent.

With 2 percent reporting now in Missouri, Schmitt has 44.6 percent and Hartzler has 24.4 percent while Greitens has 16.7 percent.

With 1 percent reporting so far in Missouri, Schmitt has a big lead–but much of what is reporting is from major metro areas like St. Louis and Kansas City. Rural areas are not in yet, so it will be interesting if this dynamic changes or not.

Still less than 3,000 votes are reported and less than 1 percent of primary turnout is reported in Missouri, so these results are insignificant so far but Schmitt has the lead and Vicky Hartzler is in second and Greitens is in third so far.

Wasserman also called the race for Stevens over Levin in Michigan:

Dave Wasserman from the Cook Political Report has already called it for Tudor Dixon in Michigan in the GOP primary for governor:

In Michigan, in the 11th congressional district Democrat primary, Reps. Haley Stevens (D-MI) and Andy Levin (D-MI) are facing off due to redistricting forcing a member-member primary. Stevens currently has the edge there, but this one has waffled back and forth and is worth watching.

With 2 percent reporting in Kansas in the GOP primary for governor, Trump-backed Derek Schmidt leads big with 74.4 percent of the vote. He is cruising there.

With 3 percent now reporting in Michigan, Tudor Dixon has expanded her lead to nearly 10,000 votes and has 46.8 percent to Rinke’s 23.1 percent.

The first votes are in now in Michigan’s GOP gubernatorial primary, with 1 percent reporting, and Trump-backed Tudor Dixon is up big. She’s at 46.1 percent and Kevin Rinke is in second with 31.1 percent–a 15 percent lead for Dixon–and while it’s still early that’s a strong start for her.

.@MissouriSOS says of the 4 million registered voters in the state, he expects less than 1.2 million to cast their vote during today’s primary. Hear why he thinks that is tonight on @fox4kc, @FOX2now, @KPLR11 and @kolr10kozl. #moleg #PrimaryElection #Elections2022 #vote #MOSen https://t.co/AC69DloQF6

Update: We are currently at an approximate ️17% turnout for @GreeneCountyMO here on Election Day.

If you have not cast your 🗳 you have plenty of time to get to your polling location by 7️⃣:0️⃣0️⃣ 🅿️Ⓜ️❗️

To find your polling location, use this link:https://t.co/L8jlLdmBY5

The August Primary Election is nearing the end! If you haven’t already voted, make plans to get to a polling place by 7 p.m. to have your voice heard. As of 4 p.m., 21% of voters in the county have cast their vote. https://t.co/MGZlN1IDI6#election2022 #electionresults2022 pic.twitter.com/TeylireLqs

How this affects the race remains to be seen, but it is interesting that despite the intense national political interest and millions of dollars spent that turnout was this low.

The first votes are coming in from Missouri–less than a percent of those cast–and Schmitt has an early lead with 276 votes to 134 for Greitens.

Per former President Donald Trump’s team, beyond his generic “Eric” endorsement in Missouri he has many endorsements on the line tonight including several major federal and statewide endorsements around the country. They are as follows:

The polls have closed in Missouri, Michigan, Kansas, and Ohio. Results are expected imminently in each.