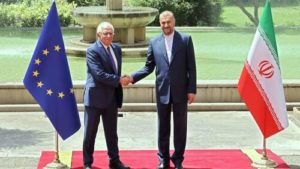 As the US is considering Iran’s response to an EU proposal to revive the nuclear deal, known as the JCPOA, The Cradle reported on Thursday the details of the agreement Tehran put forward. The Cradle report cited an unnamed Iranian source who said that the deal includes comprehensive sanctions relief for Iran and a series of measures meant to deter the US from withdrawing from the agreement in the future.

Iran has to shut down some centrifuges to bring its nuclear program back into the limits of the JCPOA. The source said that the centrifuges will be left in a state such that if the US pulls out of the deal again, the centrifuges could be restarted within a year.

“The platforms of the centrifuges will not be destroyed and their connections and electricity are collected, which brings our rebuildability to under one year and is a kind of guarantee,” the source said.

The source said that altogether, there are 21 guarantees written into the deal to alleviate Iran’s concerns about the US withdrawing from the agreement. Under one guarantee, if the US leaves the deal, there will be a three-year and one-month grace period during which foreign companies will be unaffected by sanctions.

It’s not clear if any guarantees that are reliant on US action would be enforceable on a future administration. Since the JCPOA is not a treaty, the next administration will not be bound by the agreement, and that issue has been a significant factor in the talks between the US and Iran.

During earlier negotiations in 2021, when the two sides were close to a deal, Iran wanted President Biden to give a guarantee that the US would stay in the agreement just for his term in office, but he refused, and the talks stalled.

According to The Cradle report, the ball is once again in Washington’s court. If the US approves the deal, its implementation will take place in stages. The first step would be the signing of the agreement in Vienna. Then, the US would cancel three executive orders signed by President Trump that withdrew the US from the JCPOA.

Striking an agreement on reviving the Joint Comprehensive Plan of Action (JCPOA, known as the Iran nuclear deal) may be achieved in the coming days, Russian Permanent Representative to the International Organizations in Vienna Mikhail Ulyanov said:https://t.co/4cVDH9orLt pic.twitter.com/yrJPnR8cMK

Iran would then have 60 days to test the sanctions relief by selling oil to Western countries and accessing Iranian funds that were frozen overseas. Sanctions against the Islamic Revolutionary Guard Corps (IRGC) will remain in place, although some will be eased by allowing Western business with Iranian companies that make “transactions” with the IRGC.

The Iranian government declined to verify the details of The Cradle report, but Iranian media has said the main outstanding issue with the US was over “guaranteeing the continuation” of the JCPOA. It’s not clear when the US will respond to Iran’s proposal, and the Biden administration is coming under pressure from Israel and Iran hawks in Washington to scrap the negotiations altogether.