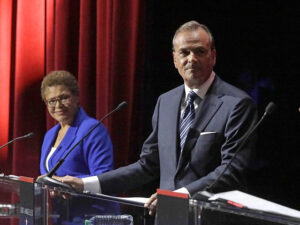 Democrat Rep. Karen Bass has been declared the projected winner in the Los Angeles mayor race over billionaire Rick Caruso.

NBC News declared Bass the projected winner on Wednesday after she pulled ahead of Caruso as late and mail-in ballots were counted throughout the week since Election Day. As of this writing, with 76 percent reporting, Bass holds a seven-point lead over Caruso — 53.1 to 46.9 percent. With her victory, Bass will become the city’s first female mayor.

“This is a historic moment and a win for all Angelenos. Mayor-elect Bass has been a personal friend for decades, and her leadership has been a constant source of inspiration and guidance during my years in office,” outgoing Mayor Eric Garcetti said in a statement. “What Karen brings to this moment is unparalleled energy and experience, both legislative and lived, from which she will drive the city’s next chapter.”

“I know that she will lead this city with grace and compassion, and that she’ll lean on her skills as a natural consensus-builder, deep ties to our neighborhoods and community leaders, and her unwavering commitment to equity and justice that has defined her as one of America’s great visionaries and leaders,” he added.

Garcetti said that Karen Bass has his “unconditional support” through her period of transition. 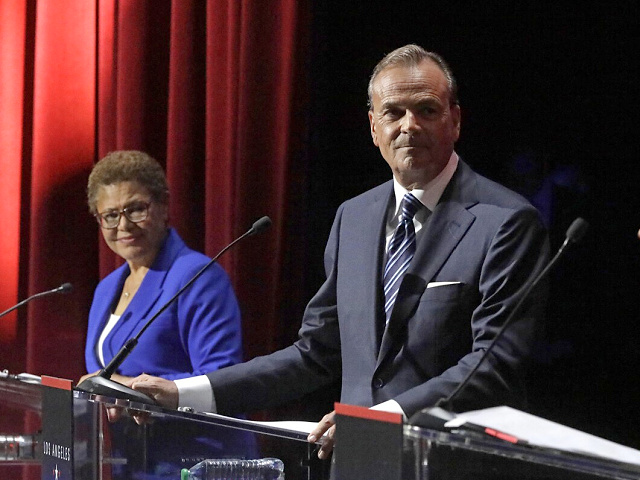 Real estate magnate Rick Caruso had been a lifelong Republican before switching over to the Democrat Party prior to his run for mayor. Running on a tough-on-crime platform with an aim to clean up the city’s ongoing homeless crisis, Caruso earned himself a string of high-profile endorsements from the likes of rapper Snoop Dogg, pop star Katy Perry, wellness queen Gwyneth Paltrow, and actor Chris Pratt.

“I’ve lived in LA for over 20 years,” Pratt wrote in an Instagram Story. “It’s been great to me. In that time I’ve seen what many residents here have seen, the city’s gradual decline into pain and utter disarray. If you live here, you know exactly what I’m talking about.”

“I don’t normally support political candidates. But in this election, there too much to lose,” he added. “If you’re an LA voter, I urge you to vote for [Rick Caruso]. He’s a builder. He knows how to get shit done. He’s the guy for our city.”