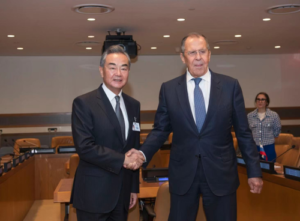 China has laid out what it says is its most authoritative statement on the Ukraine war, after recent weeks have seen state officials and media pundits assert positions which marked varying degrees of justifying the Russian invasion, and condemning NATO expansion.

Chinese state media revealed the comments on Friday, and according to Wang, “Those four objectives are China’s most authoritative statement on the Ukrainian issue and also China’s fundamental approach to this issue,” Bloomberg reports.

This follows what appeared to be rare public criticisms of Russian President Vladimir Putin coming from China and India at the Uzbekistan security summit a week ago.

Modi had told Putin directly that now “is not a time for war.” While some pundits said the West was “cherry picking” these comments and exaggerating their importance, the FT underscored that:

The remarks, at a summit in Uzbekistan, came days after a Ukrainian attack forced Russia’s army to surrender more than 3,000 sq km of territory. The comments were “a genuine and clear signal” of annoyance, one senior European official said, adding that India and China could adjust their actions towards both Russia and the west. A senior European minister told the Financial Times they interpreted the comments as “actual criticism”.

In the opening months, China either kept mum altogether when pressed to condemn Russia’s invasion of Ukraine, or else suggested Moscow’s security interests were legitimate. Washington had even accused China of providing military equipment resupplies to Moscow – a charge which was never backed by evidence.

Wang told the UNGA meeting at the end of this week, “We must strive for the parties to resume negotiations without any preconditions” – in the clearest indicator thus far that China is now pushing for the resumption of dialogue, but both warring sides appear further than ever from the negotiating table at this point.