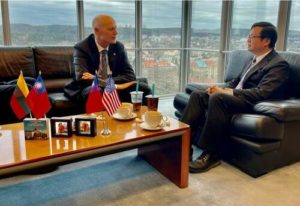 China is again conducting major military exercises in waters around Taiwan, according to state media reports, which further decried US support to Taiwan separatist forces as “futile”.

China’s Defense Ministry was cited in Reuters as describing the drills as a warning aimed at the visit of a US senator. It said “China firmly opposes the visit by a US senator to Taiwan which severely damages the relationship of the two countries and two militaries, while it added that the drill near Taiwan is directed at US and Taiwan provocation.”

US Senator Rick Scott of Florida arrived in Taiwan on Thursday afternoon for a two-day visit. Importantly, his visit marks no less than the seventh US senator to visit the democratic-run island this year alone. This after a group of six senators made an unannounced visit in April led by chairman of the Senate Foreign Relations Committee Bob Menendez, which Beijing also vehemently denounced.

“Scott is scheduled to meet with President Tsai Ying-wen and Premier Su Tseng-chang during his visit, the ministry said, adding that Minister of Foreign Affairs Joseph Wu was to host a banquet to welcome him,” regional sources detailed of his trip.

Meanwhile a top China official who overseas cross-strait affairs on Thursday declared that “reunification” of the island remains at the center of national rejuvenation plans.

In an article published in People’s Daily on Thursday, Liu Jieyi, head of the Taiwan Affairs Office, said one focus of the strategy would be preventing and resolving major risks and hidden dangers in the Taiwan Strait, creating a “favorable environment” for national rejuvenation.

“Our growing comprehensive strength and significant institutional advantages continue to be transformed into efficiency in work related to Taiwan issues and push forward the process of national reunification,” Liu said.

The concept of “peaceful reunification” with Taiwan has been pushed by Beijing for decades; however, Liu in his op-ed reiterated that China has never ruled out the option of using force.

Top Beijing officials have also recently gone on record to say that US stoking “independence forces” remains a bright red line which could result in war. But in light of the Russian invasion of Ukraine over the last more than four months, the Biden administration has been wary that President Xi could borrow from Putin’s playbook and stage a ‘shock’ blitz of the island.

Taiwan has condemned the fresh PLA military drills as a “provocation” and has put its forces on high alert, as China sends fighter jets across the strait as part of its typical messaging. Taiwan’s air force in turn scrambled fighters to intercept and warn off the Chinese aircraft.