Chaos Breaks Out As Reporters Ask Fauci About COVID Origins 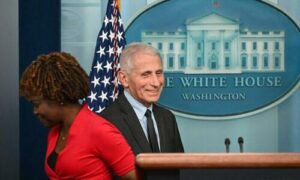 Chaos broke out in the White House press room on Tuesday, after multiple reporters asked Anthony Fauci questions about the origins of Covid-19 and related investigations.

“You need to call people across the room! She has a valid question, she’s asked about the origin of COVID,” a reporter from Africa Today shot back.

Daily Caller’s @DianaGlebova tries to ask Dr. Fauci about what he did to investigate the origins of covid and Jean-Pierre shuts her down.

Another reporter yells at her for not letting Diana ask the question. pic.twitter.com/RieiEBwl2p

Fauci only ended up answering three questions – including one about House Republicans taking the majority in Congress and potentially investigating him.

Multiple GOP lawmakers have signaled they would call him to testify over the origins of the COVID-19 virus and his agency having provided funding to a third party to carry out controversial research in Wuhan, China.

The longtime federal official said that he has testified “hundreds of times” and would comply with Republicans if he is asked. Regarding questions about the origin of COVID-19, Fauci did not answer Tuesday. -Epoch Times

“I’ll let other people judge the value or not of my accomplishments, but I would like people to remember about what I’ve done, is that every day for all of those years I’ve given it everything that I have and I’ve never left anything on the field,” Fauci said.

He then called on people to get updated COVID-19 booster shots.

“Whether you’re a far-right Republican or a far-left Democrat, it doesn’t make any difference to me,” he said. “I look upon it the same way as I did in the emergency room in middle New York City when I was taking care of everybody who was coming in off the street.”

Fauci: “So my message and my final message — maybe the final message I give you from this podium — is that please, for your own safety, for that of your family, get your updated COVID-19 shot as soon as you’re eligible to protect yourself, your family and your community” pic.twitter.com/Kaw25iKb7b

More via The Epoch Times;

Fauci has been targeted by GOP officials and conservatives for the often dire predictions he’s made about the trajectory of COVID-19 and for publicly backing COVID-19 shutdown orders, mask mandates, and vaccine mandates. Some, like Republican Florida Gov. Ron DeSantis, said that Fauci and other federal officials have attempted to create panic over the virus.

DeSantis in August told podcaster Dan Bongino that Fauci tried to “sow fear in the population and scared a lot of parents” when he called for schools to be shut down in favor of in-person learning. “We can never go down that road,” DeSantis said.

In the statement announcing the move in July, Fauci stated he is “not retiring” and will work on “science and public health and to inspire and mentor the next generation of scientific leaders as they help prepare the world to face future infectious disease threats.”

NIAID provided funds to EcoHealth Alliance, which conducted bat coronavirus research at the Wuhan Institute of Virology in China before the outbreak of COVID-19 in Wuhan. Chinese Communist Party officials have officially stated that the virus emerged at a wet market, but some U.S. intelligence officials believe it emerged at the Wuhan lab.

Republican lawmakers who have been investigating the lab-leak origin theory want to look further into whether NIAID or Fauci played a role in doling out funds to EcoHealth.

Missouri Attorney General Eric Schmitt, also a Republican, and Louisiana Attorney General Jeff Landry are expected to testify against Fauci as part of a lawsuit. In a lawsuit in May, the two officials alleged that Fauci’s agency and other federal officials colluded with social media firms to censor speech.

“During COVID, we know that high-ranking Facebook officials were text messaging the surgeon general of the United States saying, ‘Hey, we took that down, what more can we do?’ We also know that there was a special portal created for Big Tech with the government to take down people and have them de-platformed,” Schmitt told Fox News earlier this week about the suit.