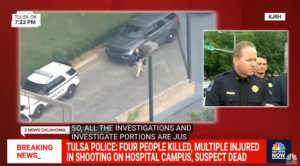 Update (2030ET): Authorities in Tusla, Oklahoma, confirm five dead, including the shooter. Police said the man used a rifle and a handgun during the shooting on the second floor of the Natalie Medical Building. 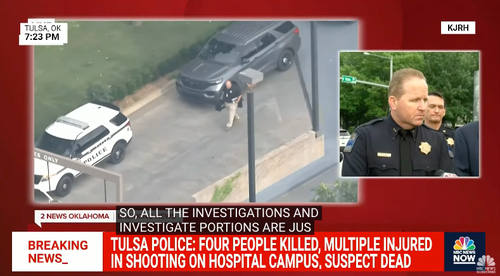 Update (1930ET): Authorities in Tusla, Oklahoma, confirm four dead, including the shooter, after a man armed with a rifle entered an outpatient surgery center at Saint Francis Hospital, according to Police Capt. Richard Meulenberg, who described the shooting as a “catastrophic scene.” The shooter reportedly committed suicide.

ACTIVE SHOOTER UPDATE: We can confirm 4 people are deceased, including the shooter, in the active shooting situation at St. Francis hospital campus.
Officers are still clearing the building. More info to follow.

According to Tulsa City Councilor Jayme Fowler, the shooter was looking for a specific physician.

On CNN Tulsa City Councilor Jayme Fowler said: From what I understand the shooter had a problem with a specific physician and he couldn’t find the physician and that’s when the shooting started.

According to the White House, President Biden has been briefed on the shooting, and “The White House is closely monitoring the situation and has reached out to state and local officials to offer support.”

Authorities locked down the hospital campus Wednesday afternoon as the situation unfolded at the Natalie Medical Building.

According to Bloomberg, aerial helicopter footage appeared to show first responders wheeling someone away from the building on a stretcher, while dozens of police cars could be seen outside.

More on the situation from Tusla Police.

There were multiple active shooter situations across the country today: a Tulsa hospital building, a Los Angeles high school and in Pennsylvania. What is going on?

Police in Tulsa, Oklahoma, responded to an active shooter situation at a medical building on Wednesday evening, according to local news KTUL.

@TulsaPolice has responded to an active shooter incident near 61st & Yale. Please stay away from the area and yield to all emergency vehicles as we deal with this response. We will update the media as soon as we are able to gather details.

Tulsa Police Department said there were multiple injuries, and the suspect had been shot. It was reported the suspect was armed with a rifle.

“A suspect has been shot,” Sgt. Richard Meulenberg told reporters at the scene.

BREAKING NEWS: This was the initial information provided to us by police about an active shooter situation at a medical building at 61st and Yale. pic.twitter.com/ROigyZTa8z

Police said there is no longer an active shooter situation at the Natalie Medical Building at Saint Francis Hospital on Yale Ave. They’re currently clearing the building floor by floor and described the incident area inside as “catastrophic.”

Darin Glodo with the Tulsa Police told CNN there were injuries, but just how many are unknown.

*This is a developing story