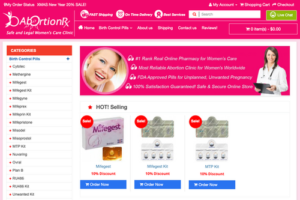 Ever since the Supreme Court struck down Roe v. Wade in June, dozens of websites have popped up which are illegally shipping abortion drugs anywhere in the US without a prescription – which violates Food and Drug Administration rules.

The operator of one website says that the demand for abortion pills has skyrocketed since the June decision, according to the Wall Street Journal, which notes that some of the websites are registered overseas – and are different from US-based telehealth operators that prescribe and sometimes ship the pills to patients who live in states where the procedure is legal.

Sites are charging as much as $500 per pack of abortion pills, and hold themselves out as providing access to pills for those who can’t reach a clinic – or who live in states where abortion telehealth is illegal.

The unregulated market creates risks, according to abortion-rights advocates, including that the pills may arrive too late to be used effectively. What’s more, those buying abortion pills online without a prescription in states where it’s illegal could face criminal charges, legal experts advise.

Some health experts expressed concerns about websites potentially selling bogus drugs or not providing adequate information and medical support. “You don’t know what you’re getting,” said Al Carter, executive director of the National Association of Boards of Pharmacy, which represents state pharmacy boards.

Two medications, mifepristone and misoprostol, are typically used in a medication-abortion regimen, which the FDA has approved for up to 10 weeks of pregnancy. Websites selling abortion pills without a prescription are mainly selling pills that haven’t been reviewed by the FDA, according to descriptions on the sites and information from buyers. The FDA has sent complaints to some companies associated with websites selling abortion pills online. -WSJ

One website based in Kazakhstan, Medside24.com, says its sales of abortion pills has doubled since Roe v. Wade was overturned. The site procures pills manufactured in China, Russia and Vietnam.

There are few-to-no requirements to buy from site abortionrx.com, another such website. According to one woman in Florida, a $249 PayPal purchase was all she needed to do – with the pills arriving four days later in a brown envelope from Las Vegas. While no instructions were included, she was able to fine them online.

At least six sites selling abortion pills without a prescription in July were registered under the name Richard Asamoah Agyemang of Denver, according to information on domain ownership. Mr. Agyemang said he is a college student and web developer. He said he doesn’t sell abortion pills. “I don’t know who made those websites,” Mr. Agyemang said. Two of the sites had been taken offline in August.

Some of the abortion-pill websites say that they sell pills from manufacturers in India. Three manufacturers mentioned on some sites, Zydus Lifesciences Ltd., Cipla Ltd. and Naman Pharma Drugs, said they weren’t aware of the sites. Cipla said it stopped making abortion medication about seven years ago.  Naman manufactures abortion pills on a contract basis for companies in Africa and doesn’t export to the U.S., a spokesman said. -WSJ

When one woman, a teacher in Ohio, ordered from Sydney-based onlineabortionpillsrx.com, they warned her no to mention the medications she was purchasing on PayPal.

“In case PayPal comes to know about what you purchased, PayPal may take legal action against you,” read an email.

That said, PayPal typically does not pursue legal action against buyers, but the company could close one’s account(s) if they violate its acceptable use policy.