Bombing At Ukrainian Embassy In Madrid Has Diplomats On High Alert 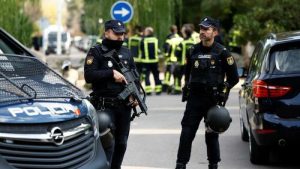 Ukrainian diplomats around the world are on high alert after a small bomb went off at Ukraine’s embassy in Madrid on Wednesday, injuring a diplomatic staff member.

The embassy had received an envelope that exploded when it was either moved or opened, and the package was addressed to Ambassador Serhii Pohoreltsev, a statement released by the Spanish government confirmed.

Ukrainian Foreign Minister Dmytro Kuleba soon after the mail bomb attack which appeared to target the country’s ambassador to Spain said he has “issued an urgent instruction to step up security at all Ukrainian embassies abroad.”

A foreign ministry statement additionally said: “Whoever is behind this explosion they will not succeed in intimidating Ukrainian diplomats or stopping their daily work to strengthen Ukraine and to counter Russian aggression.”

It’s unclear whether Ambassador Serhii Pohoreltsev was at the embassy at the time, or how close in proximity he was to the explosion. Spain’s Foreign Affairs Minister Jose Manuel Albares held a phone call with Amb. Pohoreltsev wherein the latter confirmed the injured person was a Ukrainian worker.

Spanish FM Albares is currently in Romania, where he’s visiting Spanish troops there on a NATO mission. Spain is among Western European countries which have from the beginning been sending consistent defense and foreign aid to Kiev.

Spain: Security tightened outside the Ukrainian Embassy in Madrid after a letter bomb injured a staff.#UkraineEmbassy #Ukraine pic.twitter.com/JLfLNpzODm

The mail bombing is under investigation, and at this point there have been no statements to suggest the police or Spanish government have any leads at this time.

Within hours after the incident, Spanish police have established a stronger security perimeter with vehicles completely surrounding the embassy location in the Hortaleza district of northeastern Madrid.