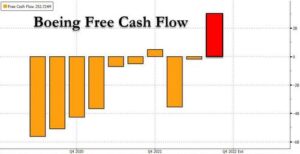 There was both good and bad news in Boeing’s latest Q3 earnings report. First the good news: after many years and many more quarters of relentless negative cash flow following its countless 737 and Dreamliner fiascoes, Boeing appears to have finally turned the corner, and in Q3 the company reported nearly $3 billion in FCF, almost 3x more than consensus estimates, largely thanks to more than expected Dreamliner deliveries. This was only the second time Boeing has generated positive cash since Chief Executive Officer Dave Calhoun took the top job in early 2020. 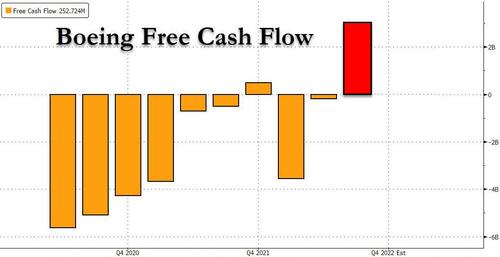 The sold cash performance overshadowed more bad news from the Arlington-based company’s defense division, which racked up $2.8 billion in losses due to cost overruns on its KC-46 aerial tanker, Air Force One and other military contracts. This resulted
in Boeing reporting a whopping adjusted loss of $6.18 a share in the period, a huge miss to analyst expectations of slightly positive earnings, marking the company’s fifth consecutive earnings miss. The company’s revenue of $16 billion also fell short of the $17.7 billion expected by Wall Street. 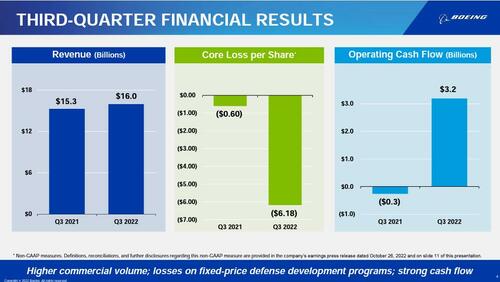 Here is a summary of the company’s Q3 results:

Here are the highlights from Boeing’s Commercial Airplane segment:

The uneven results underscored Boeing’s slow progress in overcoming supplier strains and the financial toll from two 737 Max crashes. Still, with cash unexpectedly surging by rising jet deliveries, stronger receipts and a tax benefit, the company sparked investors’ hope that it’s finally emerging from one of the worst crises in its history.

After several quarters of relentless declines, Boeing’s quarter-end cash finally rose, pushing higher by almost $3 billion from $11.4BN to $14.3BN at Sept 30, while debt was unchanged. The airplane manufacturer said in presentation slides that it has “sufficient liquidity” and expects to generate positive FCF for the rest of 2022. 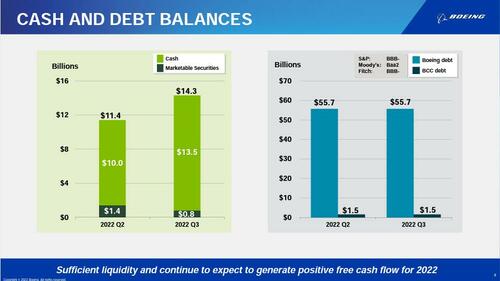 As Bloomberg reports, in an early-morning message to employees, CEO Calhoun touted the progress toward Boeing’s goal of achieving positive free cash flow this year and blamed the defense unit’s latest losses on “higher estimated manufacturing and supply-chain costs, as well as technical challenges” on a handful of military programs with fixed-price contracts.

“Turnarounds take time — and we have more work to do — but I am confident in our team and the actions we’re taking for the future,” Calhoun said.

Having mostly passed the hurricane from the 737-MAX fiasco, Boeing has been hammered with a series of cost overruns: the company had already recorded $1.5 billion in cost overruns on fixed-price defense contracts during the first half of this year as it dealt with shortages of workers with security clearance and other supplier stresses. Calhoun declared in April that the company would no longer bid near its estimated costs as it did last decade to secure high-profile contracts, from a military trainer to the Air Force One replacements now facing ballooning expenses.

Boeing is working to mitigate risks on the programs, Calhoun said. He touted other work underway to stabilize Boeing’s factories, like hiring 10,000 employees, expanding digital tools to track inventory, creating teams of experts to address industrywide shortages and ramping up its own parts-fabrication capacity to help offset supplier shortfalls.

After first dumping in kneejerk response to the bad news, then spiking on the good news, BA shares were little changed as of 9:00 a.m. before the start of regular trading. Boeing had declined 27% this year through Tuesday’s close. 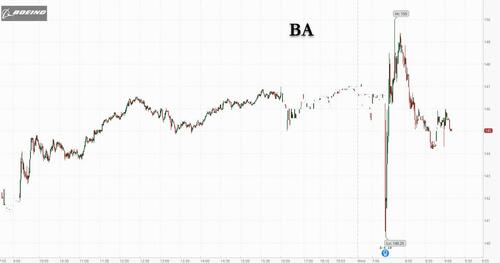