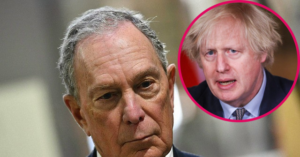 Boris Johnson gave his remarks during an after-dinner speech at the Bloomberg New Economy Forum in Singapore on Tuesday, where he reportedly called China a “coercive autocracy” in front of an estimated 500 Asian businesspeople investors, and diplomats, according to The Guardian.

Let’s look at Russia and China. The two former communist tyrannies in which power has once again been concentrated in the hands of a single ruler. Two monocultural states that have been traditionally hostile to immigration and that are becoming increasingly nationalist in their attitudes.

Two permanent UN security council members that back each other up and enable each other and which are willing to show a candid disregard for the rule of international law, and two countries that in the last year have demonstrated the immense limitations of their political systems by the disastrous mistakes they have made.

Considering that a majority of businesses in Asian countries have a favorable relationship with China, Johnson’s remarks were not well-received. One dinner guest told The Guardian:

Boris was typically funny and charming but he was also pretty belligerent in his criticism of a bunch of foreign governments, especially China and Russia, which he described as coercive autocracies. In Britain, it would have been absolutely fine to single out China. But in Asia it wasn’t.

“Boris was very, very critical. The speech was pretty shocking. Clearly people felt uncomfortable. He used very undiplomatic language about China, at a conference in Asia. A former British foreign secretary and prime minister should have known better,” another added.

Mike Bloomberg, who has a history of coddling Communist China to protect his business interests, apologized for the comments, saying that Johnson’s words were “his thoughts alone.”:

Those were his thoughts and his thoughts alone, not cleared in advance by anyone nor shared with me personally. Bloomberg and NEF’s forums are a diverse group of views, and the presentation was meant as after-dinner entertainment rather than serious discussion of important controversial and complex issues.

“And I’m sure you know based on many years of interaction with us that our respect for all points of view and those that serve in government is complete and heartfelt,” he added. “To those of you who were upset and concerned by what the speaker said, you have my apologies.”

“And if you weren’t upset, perhaps you’ve enjoyed Boris Johnson – he is who he is, … he’s very controversial but also very entertaining. He was trying to be amusing rather than informative and serious, and I think we need to give him a little bit of credit for that,” he concluded.

A spokesperson for the former prime minister made no apologies for his comments and said that he will continue to be a critic of authoritarianism.

“Mr. Johnson is robust in his criticism of authoritarianism and autocracy – including in Russia and China – and will continue to be so. He will continue to make the case for freedom and democracy on the world stage,” the spokesperson.

Bloomberg has issued no other comment on the matter.

As Breitbart Editor-in-Chief Alex Marlow profiled in his book, Breaking the News, Mike Bloomberg and his top associates within his news conglomerate “regularly met in Beijing with top Chinese Communist Party (CCP) officials and propagandists” over the course of several years:

According to documents reviewed while researching for this book, these propagandists regulate Bloomberg LP and control the extent to which the former Democrat mega-donor-turned presidential candidate’s business can access the gigantic Chinese market. Michael Bloomberg himself has spoken favorably—even glowingly—about China, President Xi Jinping, and other top Beijing officials. Bloomberg LP seemingly does a lot more business with China than its competitors.

Breitbart News is revealing images for the first time in American media that confirm the meetings. Details of the meeting, which appear here and in Breaking the News, originally were posted to an official Chinese state media website and have not yet been published in the U.S. press.

In the book, I reveal details of a year-long investigation into corporate media I conducted with a small team of researchers. Among the books’ numerous bombshells, I report on the true extent to which American media outlets are willing to go to curry favor with the Communist regime in China.

Sen. Marsha Blackburn (R-TN) later told Breitbart News that Bloomberg has aided in China’s geopolitical rise while “making money hand over fist off of the Chinese market and by utilizing the Chinese Communist Party’s relationships.” She noted:

China’s export of consumer goods has increased during the pandemic. China took our jobs. They sent to us this virus that shut our economy down. People head home, and China has already cornered the market on PPE, and then they increase their exports of consumables to the American marketplace because people are using more of those consumables as they are staying at home.

As Breitbart News international editor Frances Martel has reported, “China is currently believed to be the home of the world’s largest concentration camps, housing between one and three million people in western Xinjiang province.”

“Most of those imprisoned are ethnic Uyghurs and other Turkic Muslims,” Martel noted. “Survivors say they experienced indoctrination, torture, slavery, and other abuses. China claims the concentration camps are ‘vocational training centers.’”