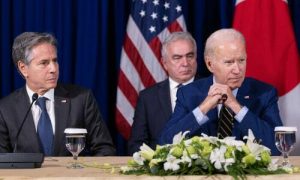 Secretary of State Antony Blinken announced the funding during a meeting with NATO allies and Group of Seven members on Tuesday.

“This equipment will be rapidly delivered to Ukraine on an emergency basis to help Ukrainians persevere through the winter,” the State Department said. “This supply package will include distribution transformers, circuit breakers, surge arresters, disconnectors, vehicles, and other key equipment.”

Russian forces have conducted a string of attacks on Ukraine’s energy infrastructure since October in what some officials believe to be a deliberate move to harm millions of civilians who are being left without heat or electricity as temperatures fell below zero.

In a Nov. 23 post on Facebook, Ukraine’s Energy Ministry said that significant shelling by Russian forces had resulted in temporary blackouts at nuclear plants, most heating and hydroelectric plants, and had also impacted electrical facilities.

“As a result, the vast majority of electricity consumers across the country have been disrupted. There are some emergency outages happening. The lack of electricity can affect the availability of heat and water supply,” the ministry wrote. “Only terrorists do this to a nation they cannot defeat so they try to simply destroy.”

The Russian attacks have resulted in Ukraine imposing regular emergency blackouts across the country.

Moscow denies targeting civilians as part of its “special military operation” in Ukraine.

The latest financial assistance from the United States comes shortly after the U.S. Agency for International Development in October announced it would grant $55 million in emergency infrastructure support in Ukraine ahead of the winter season.

That funding will support the repairs and maintenance of pipes and other equipment necessary to deliver heating to homes, hospitals, schools, and businesses across Ukraine, officials said. It includes funding for generators, as well as money for alternative fuel sources to hospitals and shelters among others.

The Biden administration recently requested $37.7 billion in additional funds for Ukraine. If approved by Congress, the total military and other assistance for Russia’s neighbor would amount to about $105 billion since the start of the conflict.

In September, Ukraine reached an agreement with the Biden administration to receive 2 billion cubic meters of natural gas from the United States over the fourth quarter of 2022 and the first three months of 2023.

“We will continue to identify additional support with allies and partners, and we are also helping to devise long-term solutions for grid restoration and repair, along with our assistance for Ukraine’s effort to advance the energy transition and build an energy system decoupled from Russian energy,” the State Department said on Tuesday.