Biden: 90 Percent Of Americans Will Be Eligible For COVID-19 Vaccine By April 19 • JoshWho News

Biden: 90 Percent of Americans Will Be Eligible for COVID-19 Vaccine by April 19 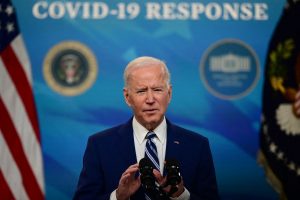 Nine out of 10 Americans will be able to get a COVID-19 vaccine by April 19, President Joe Biden announced on Monday.

“I am pleased to announce that at least 90 percent of all adults in this country will be eligible to be vaccinated by April the 19th, just three weeks from now, because we have vaccines for the vast, vast majority of adults. You won’t have to wait until May 1. You will be eligible on April 19,” he said at the White House.

“Finally, the final 10 percent will be eligible no later than May 1,” he added.

Also by mid-April, 90 percent of Americans will be within five miles of a place where they can get a shot.

Biden spoke of several new developments in the battle against COVID-19, the disease caused by the CCP (Chinese Communist Party) virus.

He said his administration is upping the number of pharmacies in the federal pharmacy vaccination program from 17,000 to nearly 40,000 across the country, in addition to plans to open 12 more mass vaccination sites by April 19.

Some Americans can not currently get a COVID-19 vaccine even if they want one, depending on factors such as their age and occupation. The first tranches of the vaccine went to frontline workers, a portion of the elderly, and other populations considered high-risk or who interact frequently with others on a day-to-day basis.

Biden is pressuring states to open vaccinations to all adults by May 1 and 31 states have agreed to do so by April 19, the White House said.

Approximately 52.6 million Americans have been fully vaccinated against the CCP (Chinese Communist Party) virus, with another 41 million getting one of two doses, as of March 19. Two of the three vaccines authorized for emergency use in the United States require two doses, spaced several weeks apart.

Data from Texas, where Gov. Greg Abbott rolled back his mandate earlier this month, showed COVID-19 cases continued to drop after the rollback. Other states that eased restrictions have also seen daily cases decrease.

But Centers for Disease Control and Prevention (CDC) Director Rochelle Walensky said in the United States overall, the seven-day average of new cases is close to 60,000 per day, an increase of 10 percent compared to the prior seven-day period, and that COVID-19 hospitalizations and deaths are also on the rise.

“I’m going to pause here. I’m going to lose the script. And I’m going to reflect on the recurring feeling I have of impending doom. We have so much to look forward to, so much promise and potential of where we are, and so much reason for hope, but right now I’m scared,” she said during a virtual briefing, adding that people should “please hold on a little while longer” before halting mitigation measures like social distancing.

CDC researchers earlier Monday reported results of a real-world study that they said showed vaccines from Pfizer and Moderna reduced the risk of infection by 90 percent.

“More and more data is coming out there, including this article here, to support the fact that it’s very effective in preventing virus transmission,” Dr. Peter Gulick, an associate professor of Medicine at the College of Osteopathic Medicine at Michigan State University who is also an expert on infectious diseases, told The Epoch Times.

“So you might be asymptomatic and still carry the virus, still be able to transmit it to somebody if there was enough virus, but more and more things coming out saying that’s not so, that even if there was virus in your nose, that it wouldn’t be enough to transmit somebody else.”