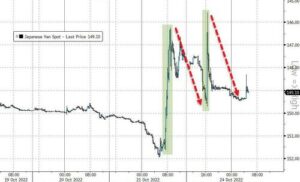 Japan has reportedly spent the equivalent of almost $37 billion to prop up the flagging yen. There may be little point in stopping the tide by defending what is essentially indefensible. 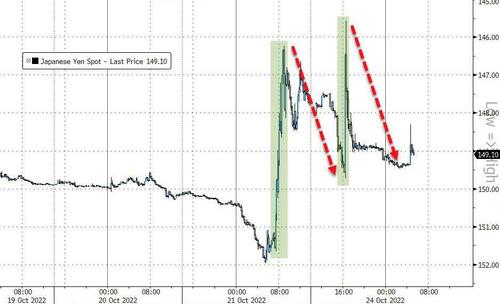 First, the facts — or at least what the media thinks really happened toward the close of trading last week. USD/JPY, which was approaching 152, made a sudden descent. One that would take it to almost 146 within just a couple of hours, a pace of decline that one wouldn’t normally see in the absence of significant news. Estimates by money broker Central Tanshi Co. suggest that the Japanese authorities spent as much as 5.5 trillion yen propping up the yen.

It’s far from clear if the reported intervention did indeed take place, but there was no denying the scale of volatility that rocked the markets. That is in contrast to the episode in September, when the Japanese authorities admitted to intervening [ZH: perhaps this time they are ashamed of admitting their involvement once the yen takes out new lows]. Unlike Friday, the earlier occurrence took place at a much earlier time on the global clock when Tokyo was still up and likely trading.

Around the time of the intervention in September, the authorities came in when USD/JPY was approaching 145. While their actions shored up the yen then, the point is that by the time of the next reported action last week, the yen had already fallen another 4+%.

At the heart of the yen’s predicament is the Bank of Japan’s control of the yield curve and what that implies for nominal and real-rate differentials. For instance, inflation-adjusted rate differentials have moved almost 400 basis points in favor of the dollar at the five-year point of the curve this year — a massive swing by any account. That is just a reflection of the contrast between what the Fed is doing and the BOJ’s inaction (which is fully warranted given Japan’s frustrating efforts to kindle long-term inflation).

However legitimate the BOJ’s stance, it’s the job of traders to price currencies, and they are doing it with aplomb. Which is why the Japanese authorities’ efforts mark a Sisyphean quest: the effort spent in rolling back a massive rock isn’t just worth it sometimes. The Bank of England learned the painful lesson by trying to mount a defense of the pound — spending billions of futile dollars in the process — before it decided to throw in the towel and exit the European Exchange Rate Mechanism about three decades ago.

No matter how extreme the moves in the yen look, the authorities may just have to grin and bear it for now. But the silver lining is that when the tide turns, as it inevitably will when rate differentials stop worsening, Japanese authorities will find that the yen is pretty elastic in a rebound rally. They may do well to remember that the yen’s current weak levels mark a point in its journey, not its ultimate destination.