Australia Warning Grandparents: “Do NOT Go Anywhere Near Your Grandkids” • JoshWho News

Australia Warning Grandparents: “Do NOT Go Anywhere Near Your Grandkids” 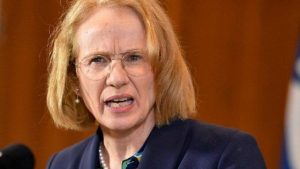 A senior health official in Australia has ordered grandparents not to “go anywhere near your grandkids” as the country doubles down on its ‘zero COVID’ policy.

Chief Health Officer (CHO) Jeannette Young made the statement after the delta variant spread to four schools in the state of Queensland.

“If you’re a grandparent of one of these kids, one of these households, and you haven’t been vaccinated, please don’t go anywhere near your grandkids,” Young hysterically said.

Summit.news reports: Unlike other countries, Australia’s implementation of the vaccine rollout has been slow, with less than 15 per cent of the population fully vaccinated.

Queensland Deputy Premier Steven Miles also reminded residents under home quarantine that they couldn’t leave their abode unless “in an emergency or to get a test.”

Young’s rhetoric resembles that of Dr. Kerry Chant, the chief health officer of New South Wales, who went so far as to tell Australians that they shouldn’t “engage in conversation with each other,” even if they’re wearing masks, in order to reduce the transmission of COVID.

As we have previously highlighted, Australia has imposed one of the most draconian lockdowns in the developed world in response to just a relative handful of cases compared to infection rates in other major countries.

In an attempt to deter protests against the brutal lockdown, Australia has deployed the military onto the streets of Sydney while people who merely post anti-lockdown information online could face fines of up to $11,000 dollars under a new law.

Australian MP Frank Pangallo also recently asserted that unvaccinated people “will need to be controlled and restricted” by authorities.

By pursuing a virtually impossible ‘zero COVID’ policy instead of living with the virus and going for herd immunity, authorities have ensured that Australians could remain under some form of lockdown for years to come.