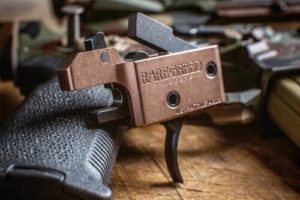 A new report from the gun blog website AmmoLand Shooting Sports News claims that Bureau of Alcohol, Tobacco, Firearms and Explosives (ATF) agents have shown up at the homes of “multiple people” to confiscate previously legal forced reset triggers for AR-15 style rifles that were recently classified as “machine guns.” 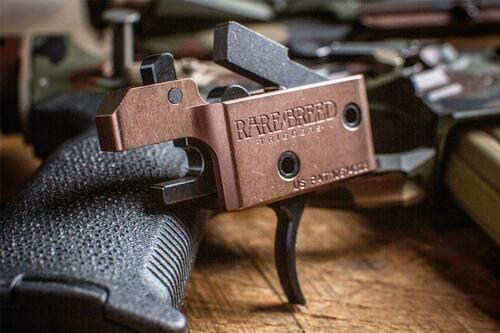 According to the report, it is unknown how the ATF acquired the customers’ information – though the owners in question acquired their triggers via Gun Broker or the Rare Breed Triggers website.

A person named “Paul Britton Finch” is allegedly one of those gun owners who got a knock on the door from ATF agents.

“Just a heads up, I got a visit today from the AFT for a trigger I bought from gunbroker and one from Rare Breed directly…hide your dogs, ladies and gentlemen. They’re comin’ a knocking,” Finch said in a post in what appears to be a gun forum.

He continued: “I don’t want to say much more on here because they [ATF] do infact watch this group and who posts what information. so take what you will of it. They’re out there with all the information you used to buy them with and enough to prosecute you if they want to push it. Yeah it sucks, but that’s the reality of it right now.”

Finch provided pictures of the special agent’s identification card who visited his home that served him with a “warning notice: you may be in violation of federal law.” The notice was dated Aug. 16. 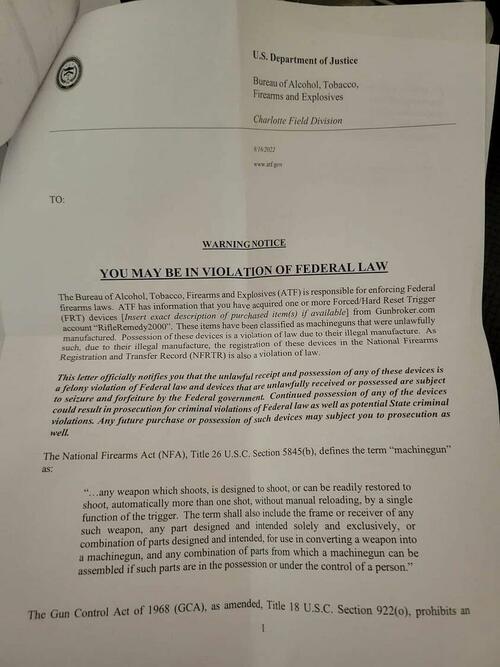 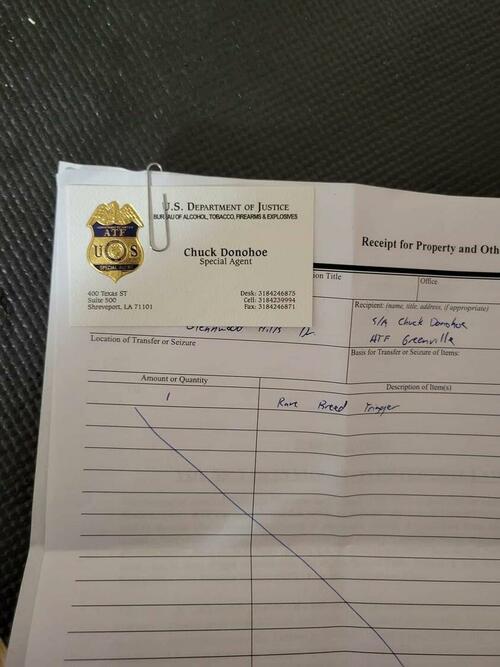 We have thoroughly covered the ATF’s battle against Rare Breed Triggers. The gun parts company once legally sold a drop-in trigger for an AR-15-style rifle that forces the trigger to reset at such a high speed that it increases the weapon’s fire rate.

Meanwhile, people are learning to 3D print these triggers, posing an even larger challenge for the ATF.

Under the Biden administration, the ATF has waged war against gun companies, parts manufacturers, and law-abiding citizens.

Last month, a Delaware man was stunned when special agents rang his doorbell and asked if they could do an inventory audit of his legally-obtained firearms.

ATF agents and a #Delaware state officer showed up to a man’s house without a warrant demanding to see his #firearms. #2A pic.twitter.com/DKuRd8UtKt

And last summer we told readers that the “puzzle pieces were all laid out” – in terms of how the ATF, weaponized under the Biden administration, would try to ban semi-automatic rifles.

One year later, the US House of Representatives passed a bill to ban importing, selling, manufacturing, or transferring semi-automatic assault weapons. However, it has no chance of passing in the Senate.

Meanwhile, the online gun community is quickly accelerating the 3D printing technology of guns that can be entirely printed at home, even the plastic ammo. We’ve pointed out that others have printed weapons at home for under $350, while one company in Austin, Texas, unveiled the 0% lower earlier this year.