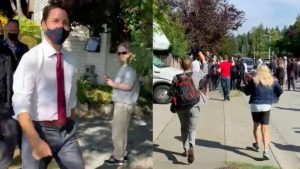 Canadians have finally had enough of their ‘liberal’ authoritarian leader Justin Trudeau.

A crowd of angry Canadians literally chased Prime Minister Justin Trudeau out of a campaign event in British Columbia for being a ‘woke idiot.’

Rebelnews.com reports: According to journalist Matt Brevner, around 100 protesters had gathered at the event, most of which were locals, though some were familiar faces that have been at lockdown protest.

Prime Minister Trudeau has faced rampant jeers and heckling from protesters as he’s toured across the country — including another incident in British Columbia, where a group of Aboriginal protesters blocked the campaign bus.

In that instance, another Global News journalist, David Akin, also deflected on behalf of the prime minister, claiming his bus was never blocked — something that was disproven by Rebel News’ Mocha Bezirgan.

Prior to the announcement of the election, the Trudeau government issued another bailout to the media, this time to the tune of $61 million, though names of which individuals or outlets received funds is still unclear.