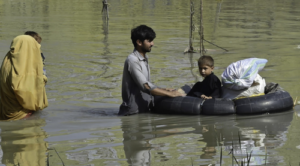 Record monsoons in Pakistan have forced “a third of the country” underwater, according to Sherry Rehman, the country’s country’s climate change minister.

Rehman said of her country, which is about 340,000 square miles: “It’s all one big ocean, there’s no dry land to pump the water out.”

The country is the 33rd largest by area, bigger than countries like Turkey and France, according to RT. It is inhabited by nearly 242 million people and is the fifth most populated nation in the world, the report says.

Rehman said the occurrence was “very far from a normal monsoon” and called it “climate dystopia at our doorstep.” The crisis that has been created as a result of the flooding has been of “unimaginable proportions”, she continued.

She called the flooding a “climate-induced humanitarian disaster of epic proportions.” 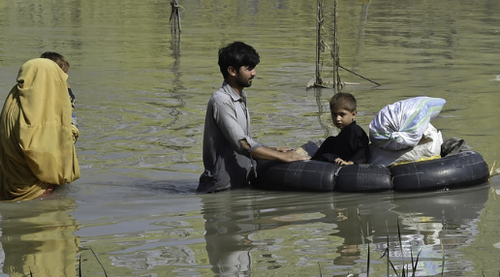 “We’ve had to deploy the navy for the first time to operate in Indo-Pakistan,” she said, due to the water. “Frankly, no one has seen this kind of downpour & flooding before, and no one country can cope alone with the multiple, cascading effects of extreme weather, climate events.”

As of Monday, the death toll from the rains was over 1,000 people. More than 3,000 roads have been destroyed, RT reports. 130 bridges and 495,000 homes have also been damaged or affected by flash floods.

33 million people in the country were estimated to have been affected.

ABC reported that in the last 24 hours alone, 75 people had died and 59 had been injured.

“Padidan, in Pakistan’s Sindh Province, received an “unheard of” nearly 70 inches of rain in one day,” the report said.