96 Victorians Quarantined at Home After Arriving From Locked-Down Brisbane 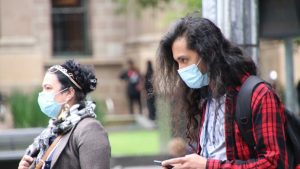 Around 100 people arrived in Victoria on Saturday from Brisbane after the Queensland government suddenly imposed a three-day lockdown announced Friday to contain the risk of spreading a highly-infectious UK variant of COVID-19.

It comes as the Victorian government told those in locked-down Greater Brisbane to stay where they are on Friday, while those who had returned from Queensland’s affected areas since Jan. 2 must get tested and self-isolate. Similar messages were circulated by other state and territory authorities as many attempted to rush out of the Brisbane area.

Border restrictions for Victoria were put in place starting midnight Friday. Travellers who arrived on Saturday have been sent home to self-isolate.

“We’ve taken their details and they’re in home quarantine until Monday night,” she said, adding that they will have to get tested for COVID-19 as soon as possible.

She said that hotel quarantine has been used as a last resort for the last two weeks as the number of people caught up in virus red zones has increased.

There were 6 cases notified to the department in the past 24 hours. This includes 0 locally acquired and 6 in hotel quarantine. There are currently 45 active cases. 23,412 test results were received – thanks, #EveryTestHelpshttps://t.co/lIUrl0ZEco#COVID19VicData pic.twitter.com/VXfCUZIt7T

Data from the DHHS dashboard as of midday Jan. 10 says 23,412 COVID-19 test results have been received in the last 24 hours, with no locally acquired cases. The six positive infections were registered in the state’s hotel quarantine system.

Around 50 percent of the people at virus testing sites have been returning travellers from Queensland, the spokesperson said, according to the Australian Associated Press.

On Friday, the Queensland government enacted the sudden lockdown in response to one case of the UK strain of the CCP virus.

National Cabinet, after an emergency meeting, declared the areas of Brisbane City, Moreton Bay, Redland, Ipswich, and Logan hotspots, leading all state and territories to place restrictions on anyone coming from Greater Brisbane.

Western Australia has taken the extra step to place reimposed a hard border with Queensland, adding to restrictions on people from Victoria and New South Wales.

Prime Minister Scott Morrison has supported Palaszczuk’s lockdown decision, saying it was a “wise call” to have a brief three-day lockdown.

“A big thanks in advance to everyone in greater Brisbane for their patience in coming days,” he wrote on Twitter on Friday. “This will buy much needed time.”