9-12 More Months: How Long US Consumers Have Before The Bottom Falls Out • JoshWho News

9-12 More Months: How Long US Consumers Have Before The Bottom Falls Out 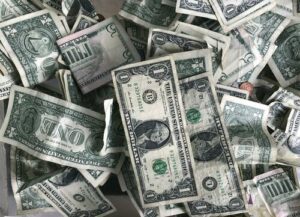 During the Covid-19 pandemic, consumers socked away an unprecedented amount of cash thanks to government stimulus and a locked down economy. There was such a surplus that people were able to also pay down debt, buy new appliances, and take vacations once draconian lockdowns were lifted. And of course, businesses raised prices and hired more workers to meet the flood of demand. 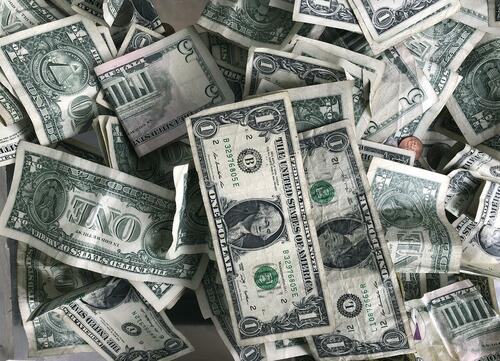 Now that we’re ‘enjoying’ inflation while wages have struggled to keep up, the question becomes – how long can consumers maintain this level of spending with their “excess” savings, which was estimated at $1.2 – $1.8 trillion heading into Q3 of this year?

Around nine to twelve months, according to the Wall Street Journal.

What’s more, consumers have already been loading up credit cards to supplement their incomes.

A brief history of recent savings trends via the Journal;

In 2019, before the pandemic hit, households saved 8.8% of their disposable income. That saving rate jumped to 16.8% in 2020, the highest annual saving rate on record, as government stimulus and unemployment benefits left many consumers flush with cash but with few opportunities to spend during lockdowns.

In 2021 the saving rate moderated to 11.8%, and it has fallen further during 2022. The rate has been below 4% for seven straight months and in September it stood at 3.1%, near its lowest level since the 2008 financial crisis.

In short; consumers are spending more and saving less of their monthly income thanks to inflation. 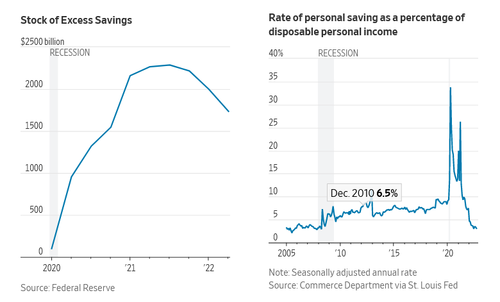 What’s more, there are signs that consumers aren’t using their savings to pay down credit card debt like they used to – with the Federal Reserve Bank of NY reporting that credit card balances increased 15% YoY in the third quarter – the largest increase in more than two decades. Delinquencies, meanwhile, rose across all income groups.

According to JPMorgan, at this rate the excess savings could be ‘entirely spent by the second half of next year.’

Goldman economists estimate that households have depleted around 25% of their excess savings, and will have spent around 60% of it by the end of 2023.

“The growth boost from strong balance sheets is probably mostly behind us but … elevated wealth levels will provide a backstop to spending for households that are hit with a negative economic shock,” they wrote last week.