5 Reasons Why Interest Rate-Cuts Are Already Around The Corner 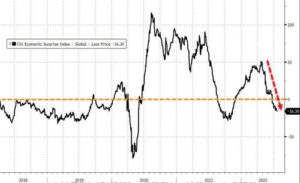 Authored by Ronni Stoeferle via GoldSwitzerland.com,

Inflation rates are currently climbing to one multi-decade high after another. And leading central banks are responding by raising interest rates at an ever-increasing rate.

In mid-July the Bank of Canada raised its key interest rate by an astounding 100 basis points, to 2.5%, after the Federal Reserve hiked rates by 75 basis points to the target range of 1.5%–1.75% in June. In an unexpected move, the SNB also responded in mid-June by raising rates by 50 basis points to -0.25%. And another rate hike of this magnitude, perhaps even by 75 basis points, is planned. Only the ECB is still pretending that inflation is not a problem.

However, given the record high inflation, real interest rates are still clearly negative, giving the impression that the current global cycle of interest rate hikes is far from reaching its end.

But this consensus assessment will prove to be wrong . The current cycle of interest rate hikes could go down in history as the shortest and weakest in recent decades. Here’s why.

No matter what data is analyzed, the economic outlook is increasingly gloomy. 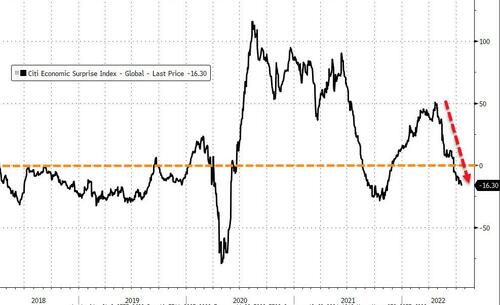 The commodity markets, for example, have retreated significantly from their interim highs up to mid-July. One of the leading economic indicators par excellence, copper, has lost around 35% from its high in March. Aluminum is down by around 40%, nickel by around 55%, steel by more than 50%, lumber by around 60%, and oil by more than 20%.

US consumer confidence is at the lowest level in its 70-year reporting history. Neither the Vietnam War, nor the Arab oil embargo of the 1970s and early 1980s, nor any stock market crash, nor the Iraq War, nor the bursting of the tech bubble, nor the Great Financial Crisis of 2008, nor the Covid lockdowns have been able to bring consumer confidence so desperately to its knees. 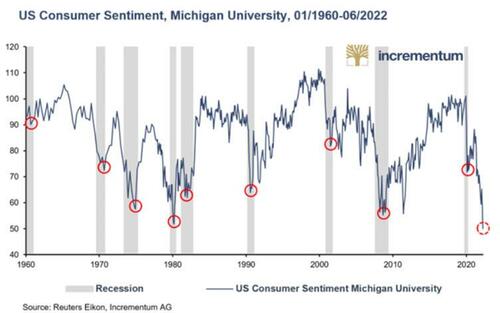 Technically, the US is already in recession. After the US economy contracted by 1.6% in the first quarter of 2022, as of mid-July the Federal Reserve Bank of Atlanta’s real-time GDP indicator, “GDP Now”, stands at an annualized -1.5% for the second quarter.

Growth-rate projections are being revised downward around the world. Even if taking economic developments into account is not necessarily part of a central bank’s mandate, central banks do have an impact on inflation trends. Interest rate hikes in an environment of low or even negative economic growth have an additional dampening effect on the economy.

2. Before the pandemic economic growth was already sluggish.

People forget quickly, especially after such drastic events as the Covid-19 pandemic, when, due to statistical effects, there were dream growth rates in 2021 and 2022. These above-average growth rates – politicians and the media spoke of an economic miracle in Italy, for example – were exploited by the politicians to create a positive atmosphere. However, this flash in the pan from statistical effects fizzled out very quickly.

After all, there are no structural reasons why the state of the global economy should be better now than before the outbreak of the pandemic. And back then, in the second half of 2019, the Federal Reserve had attempted to combat the cooling economy with no fewer than three interest rate cuts.

In fact, on top of the tensions existing in late 2019 – chief among them the trade war between the US and China – a host of additional burdening factors has emerged: the distortions of the pandemic, which are far from being overcome, including persistent supply chain problems and labor market imbalances; the war in Ukraine; significantly higher sovereign debt ratios; the real estate crisis in China; the pronounced emerging energy crisis; likely food shortages; and associated political destabilization. But long-term developments, such as striking demographic changes, are also having an increasingly significant impact. Even in the comparatively young US, the working age population (15-64 years) shrank for the first time in 2019.

So even if the global economy were able to return to the growth levels seen before the pandemic, this would be a continuation of a fundamental downward trend. The Federal Reserve’s three rate cuts in the second half of 2019 attempted to combat this downward trend.

As a result, interest service will soon become a problem for the United States, as confirmed by calculations of the Congressional Budget Office. By 2024, interest service will still ease slightly from the current 1.4% of GDP to 1.1%, despite huge budget deficits in 2020 and 2021 of more than 10% each. Starting in 2024, though, interest expense as a share of GDP begins to rise, reaching 8.6% in 2051 in the CBO’s baseline scenario. This would require just under one-third of tax revenues to be spent on interest service alone.

This calculation is based on the assumption that the yield on 10-year US Treasuries increases to 3.3% in 2030 and to 4.9% in 2050. This would be a rather moderate increase by historical standards. In 2001, the 10-year US Treasury bond yielded 5.0%, and in 1991 it was as high as 7.9%. Assuming a higher average interest rate on government debt of 2.7% in 2030 and 6.6% in 2050, instead of 2.2% and 4.6% respectively in the baseline scenario, we would end up with an interest service of 15.8% of GDP. The national debt would thereby increase to 260% by 2051, and these calculations do not include the budgeted spending of the second major pandemic support program, the American Rescue Plan, amounting to USD 1.9trn, or nearly 10% of GDP. The assumed real growth rates of just over 1.6% per year on average may also prove too optimistic and exacerbate the problem.

The situation is no better in many countries around the world. While countries such as Greece and Italy are suffering first and foremost from their high levels of government debt, in Scandinavia and Switzerland it is private households and/or the corporate sector that would suffer from interest rate hikes due to their high levels of debt.

The fact that in this macroeconomic view France, with a total debt of almost 350% of GDP, even dwarfs Greece, may be the obvious reason why Christine Lagarde, as ECB president, is acting so hesitantly.

4. Debt relief through inflation is counteracted by an increase in government spending.

It is one of the supposed standard wisdoms that states can deleverage themselves in phases of high inflation. However, this perfidious debt relief works only as long as government spending grows more slowly than the inflation rate. Increases in transfer payments below the inflation rate are thus a simple and obvious instrument for deleveraging through inflation, but at the expense of the weaker members of society. To put it bluntly, transfer recipients restructure the state budget by being forced to forego consumption as a result of a real decline in transfer payments.

However, this automatism is not as strong as it may seem at first glance. Statutory inflation adjustments may diminish this effect. In the US, for example, the automatic increase in payments of Old-Age, Survivors and Disability Insurance (OASDI) in line with the CPI is required by law. Similarly, additional spending or tax cuts to combat the effects of inflation lessen the debt-reduction effect of inflation. Numerous countries have already adopted measures designed to relieve low-income earners and industry of the considerable additional burden caused by the sharp rise in inflation.

Above a certain level of inflation, the debt-relief effect of inflation on government budgets is even reversed. This is because real tax revenues erode with rising inflation, since the time at which tax liabilities are established and the time at which they are paid can differ significantly for some high-yielding types of tax, such as income tax. This fiscally significant phenomenon is known as the Tanzi effect.

Calculations by the German DZ Bank show that using the GDP deflator as an inflation indicator, inflation of 3% per year would significantly reduce the debt ratio in those countries that have a low primary deficit or possibly even a primary surplus and a comparatively high debt ratio. Italian government debt could thus fall by 20 percentage points or 13% to a still high 136% of GDP by 2026. With an inflation rate of 5%, which is more in line with current reality, the decline would amount to 32 percentage points or around 20%. The corresponding figures for Germany show a decline in public debt from 69% to 58% in 2026 in the 3% scenario and to 53% in the 5% scenario. This would put German government debt well below the 60% Maastricht debt ceiling again. But, as we have said, this deleveraging effect of inflation presupposes that the states continue to achieve a primary surplus.

But the argument against this approach is that countless packages of measures to combat inflationary consequences have already been adopted – and many more will follow. Consequently, the (government) debt burden will not decline markedly and the scope for interest rate hikes will remain limited.

The extent to which short-term thinking dominates today and reduces government’s potential gains through inflation is currently evident in Germany. In order to profit from the low level of inflation, the finance ministers of previous governments had increasingly relied on inflation-indexed bonds. Germany is now being presented with the bill. Although inflation-indexed bonds account for only 5% of the federal government’s total debt, their share of interest payments will be around 25% in 2023. Next year alone, there will be – deficit-increasing – additional expenditures of more than 7bn EUR.

Markets have already realized that central banks have little room for maneuver. For the US, markets currently expect the first interest rate cuts, averaging 60 basis points, as early as the second quarter of 2023. 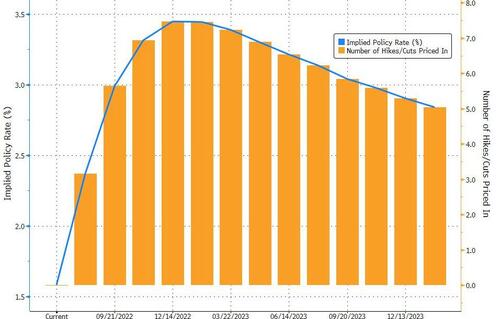 The cycle of interest rate hikes will therefore come to an end before it has really begun.

Negative real interest rates will stay with us for a long time and thus create a positive environment for gold. Because of the high level of debt, interest rates that actually fight inflation would lead directly to a veritable debt crisis as well as trigger a deep recession. No government in the world would survive such an economic horror scenario. Even if inflation also causes governments to falter, the Ukraine war provides a politically plausible excuse.

For the euro zone, the situation for gold looks even more positive. The extremely hesitant approach of the ECB has even pushed the euro below parity with the US dollar. The fundamental weakness of the euro has to a large extent compensated for the weakness of gold in recent weeks, and since the beginning of the year gold in euro terms has therefore remained strongly positive.